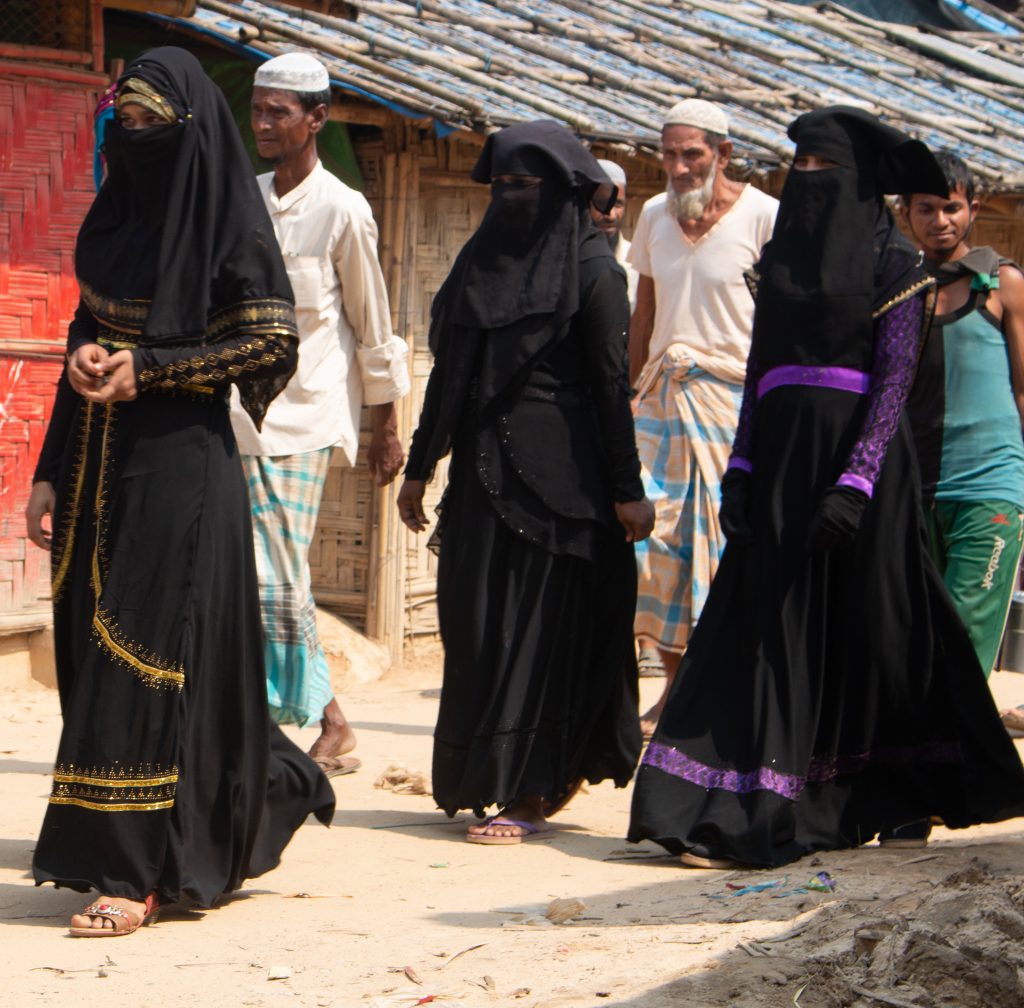 Anna, my 17-year-old language helper, and I sit bent over a picture book. We are in her family´s hut in the biggest refugee camp in the world. We are in the back of the hut, where only family members and women are allowed to stay. Suddenly she straightens up and begins to listen to the commotion outside. She jumps up quickly, runs behind the door and crouches down.

One second later a Rohingya man, whom I have never seen before, rushes into the room and searches for her. The man discovers Anna behind the low tin door and grabs for her. She has a panicked face, however she does not defend herself at all. So, I jump up, stand between Anna and the man and shout “Go away! Go away”. The man takes a step back. I use this moment to slam the door in front of him.

At once the man reaches through the door slot at the top. He grabs after Anna’s headscarf and tears it from her head. Anna tries to hide her hair with her arms. She is exposed and that brings shame on a woman and to her family. Right in time, I manage to grab the other end of the headscarf and fight with the man for it. All of a sudden, the man is gone. Anna is ashamed and asks me if we can stop the lesson for today, explaining she is exhausted.

Two weeks later, Anna tells me that she will get married. Suspecting something bad, I ask her: “To the man who attacked you recently?” Smiling sadly, she confirms my worry and excuses the behaviour of her future husband: “The event was a joke. That’s how the Rohingya men do it sometimes.” In a whisper, she confirms that she was scared and did not want to leave her home. But her destiny is to marry and she wants to be obedient.

Such incidents are now more common in the camps than they were back in Rakhine. This is something that some men do if they really want a certain girl, but they had been previously rejected by a family for marriage. They put the girl in a shameful situation and then, in order to restore honour, the family has to give the man this girl as a wife. For fathers and brothers, it has become difficult to protect their sisters and daughters in such densely populated places and from young men, who are bored, because they have no access to school and work.

A Rohingya father explained why he tried to marry his 15-year-old daughter off as soon as possible. “The camps here are so crowded. As parents, we feel it´s safer for our girls to get married quickly to avoid any kind of incidents. I’m afraid of the boys. We never know what could happen. They might take my daughter away and that would be shameful for me.”