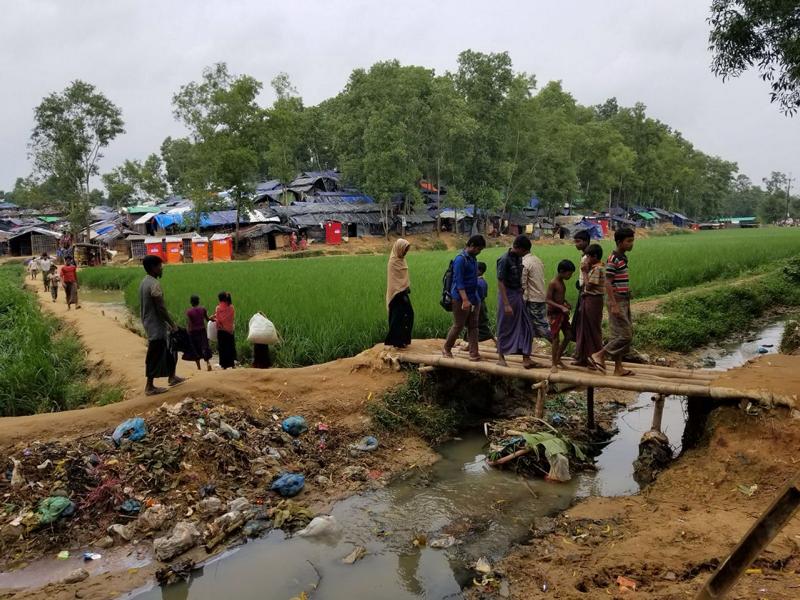 My name is Hasina. I lived with my parents and two brothers in Rakhine state. My father was a rickshaw driver. Some days when he made enough money, he brought some sweets home for us children, that was always nice. We lived in a hut made of bamboo, just big enough that we all could sleep in it. Relatives lived nearby.

My elder brother and I went to school. But the teaching was so poor, that we did not understand and had to take extra private lessons. But that was extremely expensive, so my parents could only afford it for my brother. There was not enough money for me. But in my first year at school I was so eager to learn that I was promoted to the second class.

It was on the 25th of August that we heard that terrorists had attacked a police station. After that the army attacked many villages and banished the inhabitants. My school was used as refuge for Buddhists who escaped from the villages.

There has been hatred against our people group longer than I have lived, but it has never been as violent as now. In our town we were despised, and more and more repressed. We girls were afraid to go out of the house. My dad did all the shopping, but we got less and less rice.

One day in September many other people of our neighborhood suggested that we flee to Bangladesh to take refuge there. We were about 100 people who left. For 10 days we had to cross the jungle, because we had to hide from the police and the army who were posted in the Buddhist villages.

Once Buddhists tried to rob us, but we ran as fast as we could. Three people were murdered by bandits.

We had to climb high mountains and to cross rivers. In one of the rivers my 2 year old brother slipped out of my mother’s arms. That was a shock! He almost drowned in the fast running water. But luckily one of our neighbors, who crossed the river further down, rescued him. Praise God! We were so happy!

The last 3 days of our escape we had no more food. On the other side of the big river that is the border between Myanmar and Bangladesh, there were many refugees of our people group who got help as much as possible. We got something to eat. That was good! My father and my brother were registered and got cards to receive food.

We were put into a big tent with many other families. Big sheets divided it into separate rooms. We brought nothing, because we had to leave all belongings behind when we got on the boat to cross the big river. We received the most necessary things like pots, rice, lentils, salt, oil and sugar, but no fruit and vegetables.

For my brothers and me life was dull. We would have liked to go to school, we even brought our school uniforms.

For drinking water, we had to stand and wait in a line – the water came out of a big truck.

Sometimes children disappeared, their parents sold them to work in cities.

We have heard from other families that very bad things have happened to people at home.

They were killed with swords or guns and the houses burnt down. What has happened to us was not nice, but I cannot imagine what others had to go through. But I do not want to think about it.

Please join us in prayer: