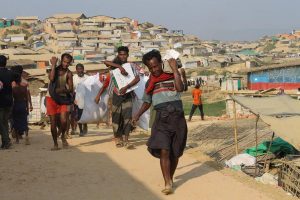 The rainy season has arrived in Bangladesh. This means an average of 3000 mm of rainfall for the period from the end of May to the end of September. Add to that regular hurricane-strength storms, called cyclones. Even in normal conditions this poses a great threat for the safety of the population and the infrastructure. But conditions are not normal.

Since August 2017 the 230,000 people living in Bangladesh’s southeastern region were joined by over 800,000 Rohingya refugees. Thick forest was cut down to clear space for refugee camps and to provide firewood, increasing the risk of landslides and flooding.

There are emergency shelters for the local population. But since these aren’t big enough for the refugees, the Rohingya are not allowed to seek safety there. Some of the refugees will be relocated to safer regions where they can live in safe tents or simple shacks. Preparations for this have been going on for a while: Hills have been levelled and made ready to accommodate these new camps. Relief agencies are already distributing vouchers for tools and materials that will enable individual families to prepare their shelters for the storm.

Even though all of this has been well-planned and carefully executed, there is a serious problem. Each area in the refugee camp has an overseer. These overseers are often corrupt, and want to decide by themselves who receives help. Anyone who they don’t like won’t be given anything. In this way most Rohingya believers never get a voucher in the first place.